Symbols are enjoying a moment in the spotlight, so-to-speak, thanks to celebrity chef Pete Evans and his recent Instagram post featuring a Nazi black sun. After a barrage of criticism, and rightly so, he responded with “I look forward to studying all of the symbols that have ever existed and research them thoroughly before posting.”

Well, Mr Evans, I’m here to save you some time and offer a hot tip: rather than undertaking any type of actual study and/or research, a simple Google search might have alerted you to the concerns that surround public displays of Nazi symbology.

Symbols are powerful things and should always be used with care. There is good reason why they have been described as being many times more powerful than words and shown to be frighteningly effective. Where written or spoken words make us think more logically, symbols can evoke an emotional response. This becomes a critical factor when symbols become weaponised, as was the case with the Nazi regime.

In semiotics, a symbol does not exist on its own. It has a relationship with what it represents. These relationships are divided into the sign, and the signified. For example, a swastika is the sign you might see, and Nazism, neo-Nazism and a belief in white racial supremacy is what your mind might tell you is being signified.

The Nazi party's ... clever branding and skilful use of rhetorical techniques like repetition of symbols was a masterstroke in galvanising so many people.

It’s interesting to note that Adolph Hitler, an aspiring artist and flag designer (or vexillologist), claimed in his manifesto, Mein Kampf, to have designed the Nazi flag himself: the red field with a white disc and a swastika in the middle. The swastika is thousands of years old, appearing in many cultures and is still a symbol of good fortune for Hindus, Buddhists and Jains. It was used enthusiastically all over the world up until the start of World War II including on Coca-Cola bottles, by the Boy Scouts movement and on Canadian hockey jerseys (eg. the Fernie Swastikas, main picture).

What’s really scary about symbols is that, when combined with rhetorical techniques like repetition, it makes them easier to remember. When it’s easier to remember it becomes easier to trust. And when it’s easier to trust it becomes easier to believe. Nazism relied on this as one of their key techniques for power. The Nazi party was the only one with a logo and brand identity in Weimar Germany. Its clever branding and skilful use of rhetorical techniques like repetition of symbols was a masterstroke in galvanising so many people – literally under their banners.

By the way, this is also a key foundation of how designers use semiotics to create logos and symbols that have meaning. It is a powerful way to quickly represent anything from soft drink to a hospital, a computer company, or an entire ideology. These techniques are used for good as well as evil. 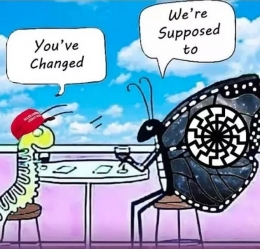 Back to the post. It shows a cartoon meme displaying a “black sun” symbol on a butterfly character. This butterfly had apparently metamorphosed from the state of its companion, the caterpillar, who was wearing a red MAGA (Make America Great Again) cap as seen in Donald Trump’s re-election campaigns.

One of the issues with this meme is that the sunwheel, or black sun, is a symbol used by the Nazi party in Germany in the middle of last century. Along with the swastika, it was a visual symbol for a cruel regime that expounded hate and genocide in the name of nationalism and racial purity. It has since been used to symbolise the neo-Nazi movement and its re-emergence in recent years.

Evans stated “an image can represent so many things to so many”. This statement is true. However, as noted previously, a simple search would have found that the dominant symbolism is one of hate and division.

In any case, Evans did seem to be aware of the symbol’s meaning. One of his responses (now deleted) to someone recognising the symbol was: “I was waiting for someone to see that.”

In an increasingly online social media landscape, the power of symbols has increased significantly. Influential figures like Pete Evans should take extra care to use them wisely.

Dr Rebecca Green is a lecturer in graphic design with UNSW School of Art & Design.